After last nights dinner we sailed south along the west coast of Greenland and by breakfast time today the FRAM was off Cape Farvel the southern tip of Greenland. We had calm seas and in the distance we could see the peaks that mark the Cape. After rounding the Cape the Captain set our course to the northeast, about 60° true and we are on our way to Iceland.

Today is a busy day onboard as there are both bridge tours and lectures. On the bridge the ships officers explain the navigation screens and the ships internal safety systems, notably the innumerable smoke and fire detectors that are located in every cabin and throughout the ships common areas. 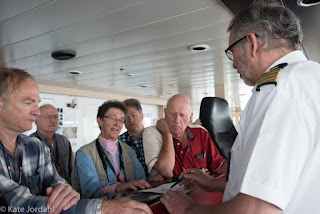 Since we boarded the FRAM, most days we have had two landings each day. As a result we have been shortchanged on lectures. Today makes up for that lack of information. For example both the Arctic and Antarctic play a large role in FRAM’s travels. For our English speaking passengers, Bob talked about his experiences as a glaciologist first at the South Pole then at Camp Century below the Greenland icecap. Frieda gave us an overview of the similarities and differences between the Arctic and the Antarctic. She discussed both the human cultural differences plus the plant and animal life. These two lecturers returned in the afternoon and Bob talked about the geo-political claims in the Arctic Ocean and Frieda talked about the cultural changes in Greenland from a hunting society to a commercial fisheries nation.

For our German speaking passengers Rudolf explained the ecological food pyramid in the Arctic and Uli provided a glaciology lecture on ice and sea-ice. Tomasz gave an introduction to the types of whales that may be encountered in Greenland and Iceland waters.

Relatively smooth motoring all day today as we continue towards Iecland.