Today we made two landings in the northern fjords that indent the north facing coast of the island of Spitsbergen. Our first stop was at southern end of fjord named Liefdefforden. Here the FRAM anchored and we divided into three groups. The hardiest of us joined the substantial hike that climbed more than 625m or 2062ft to the top of a peak just west of our anchoring site. The intermediate group went kayaking for 3 hours along the coast of the fjord. The remainders, those who preferred an easier start to their day, were able to cruise and enjoy the area from the comfortable seats in the 10 passenger Polarcirkle boats. We cruised past the front of the large glacier that discharges into the fjord. This glacier, Monacobreen, is named after Duke Albert I of Monaco. The Duke mapped this area in 1906/1907 on one of his many expeditions to Spitsbergen. It is the second largest glacier in Svalbard and the area is noted for its beauty. The Duke later became the Prince of Monaco and the current prince is a direct descendent.

Our second landing was at a smaller fjord named Bockfjorden. As the sunny afternoon evolved into a sunny evening we went ashore and climbed a bit to one sites of the hot springs. At this site, today, the hot springs were barely a trickle though the whitish calcite rocks around the small dome suggested that at times the springs must be more active with a larger outflow of geothermal calcite rich water. No matter as geologically this site is important it is the most recent volcanic activity known in Svalbard.

Our dinner was later this evening but as we finished dessert, beluga whales

started blowing and breaching and we could see them from the dining room windows.

The evening closed with a drive-by of Moffen. This islet is just north of 80° North Latitude and is the northernmost point most of us have ever reached. The islet has a large orange navigation marker and around this marker were many walrus. The big animals were so closely packed that from the FRAM we could not tell if there were 25 or more than 50 animals. 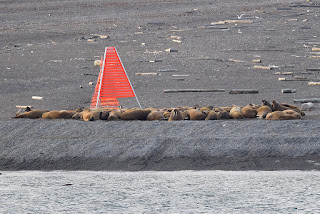