Life on an island 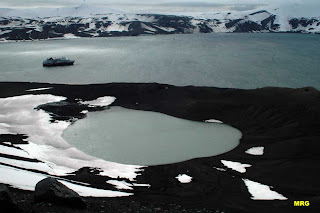 Actually, on two islands, as we visited both Deception and Astrolabe Islands today, and we had a lovely time there. 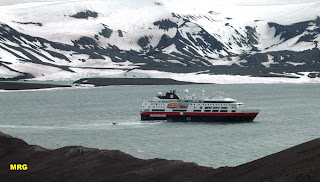 Early in the morning, we arrived to Deception Island and sailed into the caldera through the impressive and famous Neptune’s Bellows, the narrow entrance into the heart of this active volcano. We navigated across Port Foster to arrive at Telephone Bay. There, we landed at Stancomb Cove and hiked along the edge of the lovely secondary volcano there – it’s a “baby” volcano inside of the much bigger volcano that is Deception Island. 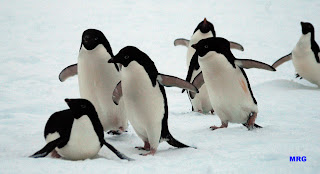 The view from the top of the ridge was very beautiful: the rim of the whole island was visible and its contours made very contrasting by the fresh snow and the clouds rolling over it; it was nice to see the icebergs floating in the distance, outside of the island; and one could –almost– feel like a bird, as the wind was a rather strong 20 knots and with the elevation, one could think to be flying…

In the afternoon, we landed across the Bransfield Strait, in Astrolabe Island. This was also a very nice landing: a cobbled beach under an imposing mountain coated by thick glaciers, dozens of seals dozing on land and atop icefloes, Adélie penguins hurrying up the snow slope and tobogganing down on their bellies, icebergs in the bay silhoutted against the setting sun Wonderful! 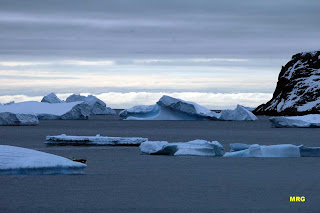