Today is a busy day for the FRAM. We docked in Ushuaia about 0715 or 7:15AM and after the clearance formalities were completed our passengers began boarding the waiting buses. Before their flights to and homeward some passengers went on guided tours while others went shopping in Ushuaia. 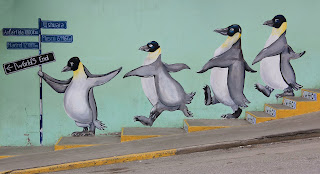 Onboard the FRAM the corridors were busy with preparations for our passengers who will arrive in the afternoon. The Expedition Staff ventured into the deep storage compartment and retrieved many boxes on the aqua colored weather-proof the jackets that will be passed out to the newly arrived passengers. 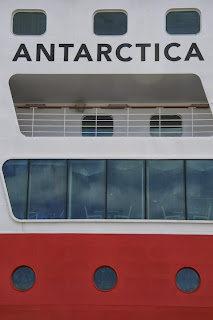 From the dock, diesel fuel then passenger’s luggage were delivered. Later fresh vegetables and galley stores were stowed onboard. Just before leaving Ushuaia we gathered on-deck for our safety drill. The Argentine pilot was onboard and the FRAM pulled away from the dock at 1752 or 5:52 PM. 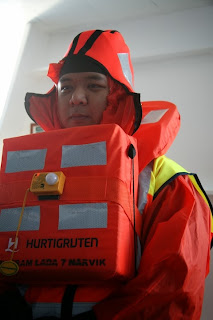 We are on our way to , the great white continent. The first leg of our voyage is east in the Beagle Channel. This Channel connects the Atlantic and and is an alternative passageway to the more northerly Straits of Magellan and the more southerly rounding of via the open oceans. The Channel was charted by the HMS Beagle on its first voyage to . In the course of that endeavor the Captain of the Beagle committed suicide and the younger Robert Fitzroy assumed command. For the second charting voyage of the Beagle Captain Fitzroy wished to have onboard gentleman to dine and converse with. The young gentleman that was selected was Charles Darwin and the way we see the world around us was forever changed.
The second leg of our voyage will be a south of Cape Horn crossing of the . Stay tuned as tomorrow we will report on the weather and sea conditions in this often rough stretch of water where the Atlantic and Pacific merge.