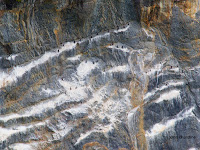 Today we returned to the Beagle Channel on our way to Puerto Williams, Cape Horn and eventually Antarctica. We started our transit with a detour down the Seno Garibaldi. This spectacular, high-sided fiord ended in a beautiful glacier, which we approached to a close distance. After turning "on a dime" using our bow and stern thrusters we sailed back down the fiord and out once again into the Beagle Channel. On our way out we spotted a small colony of Imperial Cormorants.

A little later we passed the "country glaciers" all named for different countries participating in a scientific expedition to observe the transit of Venus across the face of the sun. These glaciers run down U-shaped valleys from the 2300 sq. km ice field atop the Chilean Cordillera  Darwin, the highest point of which is over 2000m above sea level. These glaciers are like a living textbook of glaciology showing clearly all the main physical features of glacial action. One of the glaciers showed a dramatic torrent of water flowing down the ice-scoured rock below the ice. They must have looked quite different before before the relatively recent warming trend that is causing most of the world's glaciers to shrink. 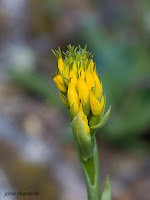 After some stimulating lectures we arrived at Puerto Williams in the late afternoon. This naval community is the most southerly town in the world. Surrounding Puerto Williams is the beautiful southern beech forest characteristic of this area of extreme southern Tierra del Fuego. We took advantage of this by making a couple of hikes to see the vegetation, animals and general scenery of the area. From midway up the hills behind Puerto Williams, we had a spectacular view of the Beagle Channel; and the afternoon was so bright and clear, that we were able to spot Ushuaia, on the other, Argentine side of the channel. In the forests we were lucky to see Gavilea lutea in bloom; one of the three southernmost orchids in the world, all of which grow here. After our different walks around the hills and forests on Isla Navarino, we had all developed a rather healthy appetite, which we satiated back on Fram, where our cooks had organised a delicious and abundant Chilean food feast.