'Round about midnight we entered the Antarctic Sound; and in a similar fashion to Miles Davis' eponymous melody, where changes in rhythm and tonality follow each other in sweet succession, during our traverse of this scenic strait at the northern tip of the peninsula, we were treated to a wonderful symphony of colours. We sailed past amazingly blue icebergs of all shapes cut against the pastel pink of an infinite sky set ablaze by the setting sun. Flat, tabular icebergs will have broken off the continental iceshelf, in this case probably from the Larsen Ice Shelf, on the eastern edge of the Antarctic Peninsula, from where they then drifted into theAntarctic Sound.

Irregularly shaped icebergs are simply older tabular icebergs, that have been eroded to capricious forms by wind and water. Many animals rest on these ice giants, and you regulary spot penguins, seals or seabirds on them. Knowing that about 70 to 90% of the iceberg lies under water, cruising past them you better keep a respectful distance in case they topple. 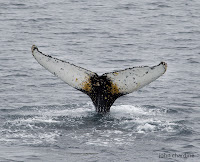 Way past midnight, this morning we sailed through the Gerlache Strait. Named after Belgian expeditioner Adrien de Gerlache, who came through here in 1897-1899, this is a panoramic seaway flanked by imposing mountains. On our approach to this afternoon's landing site, Cuverville island, we were visited by some humpback whales. It was a fantastic sight to see them diving to herd krill into their gapes, waving their goodbyes with their unique tails as they disappeared into the deep.
Around 15 o' clock we landed at Cuverville Island, where we visited a big colony of Gentoo penguins. The site is really amazing: the island is surrounded by dramatic mountains covered with glaciers, and many icebergs were floating in front of the beach - it was a perfect postcard. The site was mostly covered by snow, but the penguins criss-crossed the snow by means of an intricate network of "penguin highways".

'Round midnight (à la Thelonius Monk, of course), we cruised the spectacular Lemaire Channel on our southward Antarctic journey. What a trip from midnight to midnight!