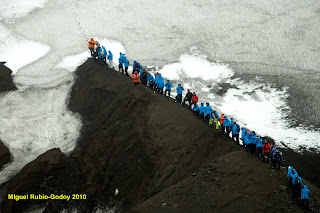 On this, our last day of Antarctic adventures before starting our long way back home, several of our passengers donned their explorer hats and exercised their adventurous hearts: starting at 6 in the morning, we climbed the steep hills surrounding Whaler's Bay, the famous derelict settlement inside the caldera of Deception Island. It was not an impromptu jogging session for the early birds - we hiked to Bailey Head! When we reached the top of the ridge, at an elevation of about 250 metres above sea level, we were completely engulfed by a thick fog bank; we had only some 30 metre visibility, but we slowly wound our way towards the chinstrap rookery. And when we got there after an hour a half's walk, the fog burned away and we were able to take in the splendid sight. This fabulous spot is where one of Sir David Attenboroughs famous TV shows was shot - and an impressive setting it is! 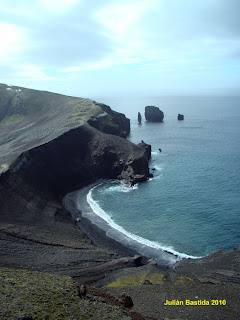 Upon return to our landing site, several of our hikers cooled off after the strenuous hike in the best - and most extreme- way possible: they went for a short swim in the gelid waters of Whaler's Bay. 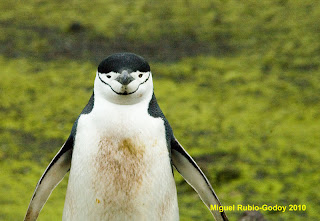 After a nice, warm lunch, some coffee perhaps, and a couple of hours' rest on board Fram, we landed in Half Moon Island. This island is located in a beautiful spot, close to majestic Livingston Island, with a view across the water to Greenwich Island. And there was plenty of life on it to make for a nice landing: on the avian front, we had chinstrap penguins, dominican seagulls, Wilson's storm petrels, and Antarctic sterns; on the marine mammal front we saw several Weddell seals, a couple of leopard seals patrolling the beach, and some humpback whales in the distance. 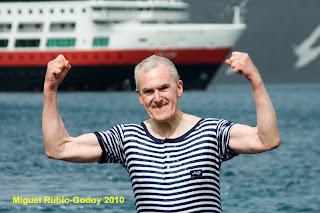 And to finish our Antarctic journey in style, midways through our charity auction, a pod of orcas swam beside our vessel: yes, these majestic creatures crowned an already fabulous day, and made their fleeting apparition a symbol of the fragile beauty we have been lucky to behold the last few days.