We woke up this morning in the caldera of Deception Island, and since the weather was terrific (= calm and sunny), we gave a second try this season to hike to Bailey Head. Bailey Head is home to 10,000s of pairs of Chinstrap Penguins which spend the austral summer there, breeding. The "usual" beach landing at Bailey is on an unprotected beach on the outside of the caldera, and is very difficult. A fortnight ago, we had tried to get there, and were stopped and driven back by a blizzard. Not so this time around: we were able to reach the crest of the mountain, and get a spectacular view from there. In fact, we were able to look across the Bransfield Strait and make out the Antarctic peninsula - just like Davis and others did in 1820, the first documented sighting of the white continent. 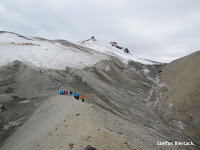 From the top of the hill, some 200m above sea-level, we descended towards the colony at Bailey Head - and when we got there after a strenuous but very pleasant walk, we were treated to the wonderful spectacle of thousands of chinstrap penguins, sitting on their nests, crawling up the slopes on their way back from the sea, shouting to greet their partners; i.e., being chinstrap penguins. The place itself is beautiful, as the wall descending from the hills that are the head proper, are covered with very green stripes of moss.

On the way back from the hike, we explored the interesting ruins found at Whaler's Bay. And after so much activity, we were very happy to visit the restaurant onboard Fram!

The double whammy was that in the afternoon, we landed on Walker Bay, a beautiful spot on Livingston Island. The pleace was teeming with interesting life: massive elephant seals; hovering giant petrels; soaring light-mantled sooty albatrosses; gentoo and chinstrap penguins; and peeking from below their parents and still sporting their eggteeth, the first penguin chicks of the season! What a wonderful day...