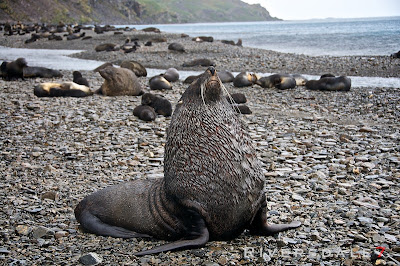 We had a beautiful day for an early morning landing in Fortuna Bay.  Fantastic in fact.  At 7:00 we loaded into the Polar Cirkle boats for a short ride to the beach. The beach is 2 km long and as we were expecting, it was filled with Antarctic Fur Seals.  Thousands of growling, howling, squealing, yelping, fighting, playing Fur Seals packed the shoreline. Big males, small females and thousands of tiny pups.  The pups are the cutest critters you have ever seen.   We were escorted by the expedition team through a veritable gauntlet of large males.  Very exciting!
Our main goal was to get to the King Penguin colony.  7000 pairs of King Penguins were ensconced on the flat gravel moraine just below König Glacier.  The colony was a pleasant 1.5 km walk from the landing site. At the colony it was wonderful to see penguins of all ages.  Adults promenaded about in regal courtship behaviour.  The fat "furry" chicks were fun to watch. If you sat or stood quietly the young birds became accustomed to your presence.  The bolder chicks would gradually shuffle up, perhaps hopeful that we might be a source of food for them.  Now and again a chick would run amok in an exuberant burst of energy.  It was if it had been wound up too tight and then suddenly let go.  It was hysterical and difficult not to laugh right out loud. 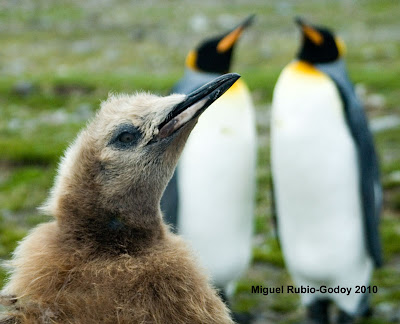 At 10:30 we set out on the famous the Shackleton walk, starting in Fortuna Bay and ending in Stromness. We made our way between and amongst the partially aggressive, partially inquisitive fur seals on the beach, and started climbing the tussoc-covered slope - and we still encountered some fur seals quite high on them; possibly enjoying the great view?  At the highest point in the hike, some 300 metres above sea level and some distance from the vegetation, too, we were treated to commanding vistas over the two neighbouring bays - this sight alone was definitely worth the trek! 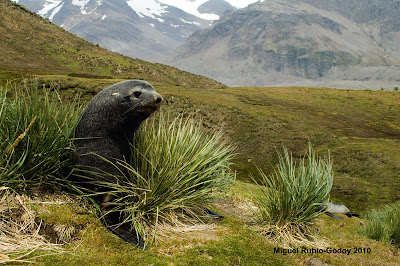 However, despite the fact that the vistas we had enjoyed were magnificent, the best was yet to come: once you arrive to the edge of the slope going down towards Stromness, you cannot help experiencing awe and admiration for Shackleton and his men, for it is from this spot where they saw the whaling station after their incredible and perilous journey. The numerous passengers that participated in the walk were more than happy to commemorate that famous adventure with a happy and multitudinous group photo.

At 15:45 we began our third landing of the day!  But my, how the weather had changed.  As we headed for the beach by the old whaling station at Stromness, stiff winds and a biting rain blew in our face.
It didn’t seem possible but there were even more Fur Seals here than at Fortuna Bay.  We “ran the gauntlet” again and made our way behind the whaling station to visit the old whaler’s graveyard. We weren’t allowed to venture into the whaling station as the buildings are unsafe and there is still lots of asbestos on the site. Cold, wet gusts of katabatic wind periodically roared down from the glaciers, winds strong enough to knock you off balance.  The driving rain added to the wild atmosphere.
By 18:30 we were all back within the comfy confines of Fram.  Tonight it will be time to decorate the Christmas tree!