One last night, one last day


Today, we are pleased to offer the thoughts of a guest blogger, author Iliya Troyanov, who sailed with us during this trip:

Some people, including the lecturers, do not mind crossing the Drake Passage, they sleep like babies the profound sleep of the well-adapted, but greenhorns like myself spend last night tossing and turning in my sleeplessness, distrusting the rolling motion and unable to quell the multitude of thoughts, images and impressions of a journey like no other, into the last Terra Nullius, a land where the exception is the rule – Antarctica. So it was only fitting that the lectures ended with two discussions on climate change, both interesting and at the same time distressing, because it became evident how long and winding, how stony and full of potholes the road to political and economic change is. No one questioned the necessity for change, but there was little agreement as to how to go about it. The Antarctic’s pristine state has exhilarated many of us (one gentleman expressing in measured words a sense of personal transformation) but, at the same time, there is a feeling of torment by the knowledge of what will become of it when humans take over - visions of its rape and plunder already triggered by the ruins on Deception Island. There is only one possible conclusion: it is incumbent that we prevent humans encroaching on it any further. And the auction in support of the Save the Albatross fund brought to mind the metaphor of a sailor who, having killed the sacred animal, is compelled to carry its body round his neck, as if it were humankind’s true cross (Coleridge): “The spirit who bideth by himself / In the land of mist and snow, / He loved the bird that loved the man / Who shot him with his bow.” 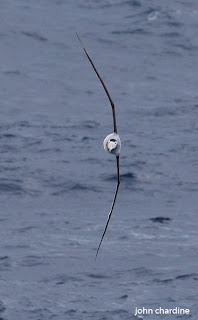 Standing on the weather deck, looking out, it seemed easy to forget civilization entirely (your hearing barely registers the quite throb of the engines). Silent birds write ephemeral messages across the monochrome sky that we have no idea how to decipher; icebergs that store the freshest water and the cleanest air there is on earth. The message of the discussions was clear: catastrophe is bearing down on us faster than we think and small steps won’t be enough. It is probably already too late to adapt humanely to the situation without there being a large number of victims. Whatever we do from now on, we won’t be able to avert certain disasters. Warming means mass exodus, famine, war. Every living system in the world is in retreat, because we are degrading the biosphere. The prime culprit is our exploitative, disposable economy and its dependence on fossil fuels. Capitalism’s pathologies are called consumption and waste. A journey into Antarctica ends with such pitiless questions – rightly so. The awareness that we take back home is a heightened one.