A lazy day on the Drake

After a busy time in Chile and Antarctica, we took advantage of our first of two sea-days on the Drake Passage by relaxing, attending lectures and generally catching up. Sea conditions were rough when we entered the Drake last night but calmed down later. Still a significant swell persisted all day and made conditions uncomfortable for some on board. 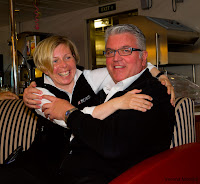 In the morning, crew, expedition staff and officers had a farewell gathering for Captain Arnvid Hansen, who is moving on to captain the Hurtigruten ship MS Finmarken. Captain Hansen was captain on the Nordnorge and Fram for several seasons in Antarctica and had the adventure spirit so necessary in these waters. He will be missed.

In the evening our new Captain Arild Hårvik hosted his first Captain's Dinner in Antarctic Waters, a tradition on the Fram for one of the last days of the cruise.

After the dinner we had our also traditional fund raising auction which supports several nature and heritage conservation charities in related to the Southern Oceans. On the auction block tonight are 2 highly desirable items- the master navigation chart for our voyage and the Hurtigruten flag that flew flapping against the wild southern winds for the last 14 days, and signed by officers and expedition staff.

A perfect ending to our day was the much anticipated and famous Fram Crew Show.