Welcome to Paradise. The day was stunning from start to finish, with unbelievable weather and amazing wildlife. Sailing under brilliant morning sunshine, as Anja made her wake-up call she spied a large pod of orca swimming near the vessel.

We scrambled out on deck to take in the action of more than a dozen killer whales in the Gerlache Strait, porpoising high out of the sea. Those who had grabbed a camera instead of a jacket were none worse for the wear – in this bright sunshine and without a whisper of wind, a light sweater was all that was necessary. Not a bad start…

The weather upheld for our morning at Cuverville. The staff noted that, unbelievably, the chicks had yet to hatch at this large rookery this year. Due to the enormous winter snowfall some of the rookeries are late in their annual breeding cycle, and we wondered how many Cuverville chicks would survive, hatching so late. We walked the shores and hills for splendid views into the Errera Channel and over Rongé Island and the Peninsula, while some paused to watch a small group from the French yacht snowboarding. The end of our landing was sensationalized by a hunting leopard seal that made quick work of one unfortunate gentoo. Much to our amazement, as the staff was ready to leave the beach, the same leopard lunged out of the sea at our Expedition Leader’s legs – close call!﻿﻿
﻿﻿ 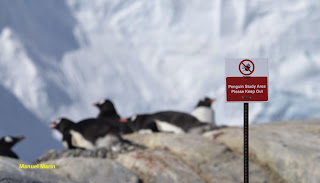 After lunch we were out on deck to drink in the lovely scenery across the Gerlache and through the Neumayer Channel. The atmosphere was hushed as we enjoyed the sounds of the Fram pushing through brash ice, and the seas lapping at her steel hull. We anchored at Port Lockroy on Goudier Island to visit the little museum situated within the old British base. Two new species were spotted this afternoon – snowy sheathbills and showy shoppers (also with bills). It was a relief to finally find some gentoo chicks, which occupied much of our visit. Back on the vessel and joined by the base staff, the sun came down upon a wonderful day, a glowing orange light bathing the frosty glaciers before slipping down behind the jagged peaks of Wiencke Island. What would tomorrow bring...? 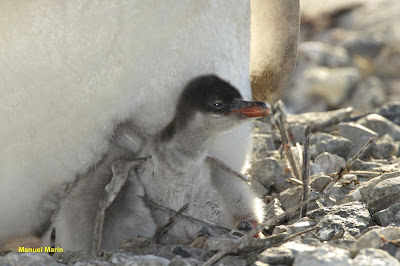