Pinch me, please! It cannot be true

It is getting better by the day on our Antarctic adventure. This morning we woke up to blue skies and breathtaking scenery. We were in Andvord Bay. A landing in Neko Harbour was what we had in mind, but then the Expedition Team returned to the ship shortly after they had gone out to prepare the landing site. Something must be amiss, we all thought, and some of us were getting disappointed because we were under the impression that the landing would have to be cancelled. Indeed, we could not land there because ice was blocking the site. Instead we went for half hour cruises with our Polar Cirkle Boats. Many of us thought that this was almost more enjoyable than the landing itself, because we were extremely fortunate with wildlife sightings during these cruises. Crabeater seals were on the iceflows in abundance and we all had good chances of taking some wonderful photographs of these friendly inhabitants of Antarctica. For a while a pod of orcas accompanied us and the excitement in the encounter with these magnificent whales was intense. 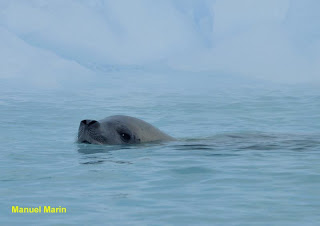 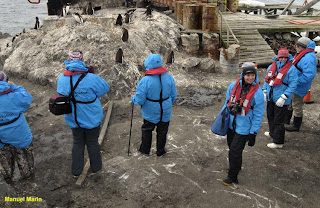 During lunch the ship repositioned to Paradise Bay which was named by whalers in the 19th century. Now, these men were not renowned for their romantic ideas, and so you can imagine how beautifully stunning the landscape is, when even whalers were reminded of paradise. The good weather developed into a truely glorious day, which even enhanced the incredible vistas. We landed at the Argentine station of Almirante Brown where a statue of the Madonna greeted us, which is not surprising for a station maintained by a Latin-American country. 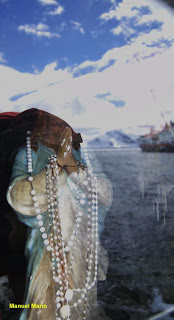 Some gentoo penguins breed here and we had the extremely rare sight of a nest with triplets in it. The biggest fun, however, was the ascent to a small mountain. Many a hardy mountain climber found it odd indeed to go hiking with a life vest and rubber boots; those who made it to the top were doubly rewarded. The panorama was more spectacular than words can express and there was slide on the snowy slope which took us back down to the landing site in no time. You can imagine that the afternoon on shore was filled with uprorious laughter.

We had another perfect day today and the Expedition Team tell us that tomorrow will be even more beautiful. Let's hope the weather stays nice, because the beauty of this continent is unfolding for us in a picture-perfect way. 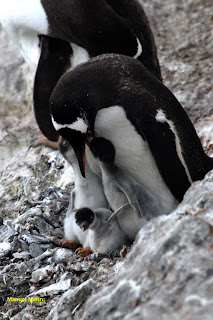