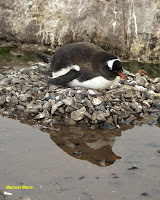 We are now on the Western side of the Antarctic Peninsula and the scenery is very different here. The mountains soar dramatically from the sea and the glaciers feed directly into sometimes rather narrow waterways. Again the weather was good for us and landing conditions were easy. Our skillful boatdrivers manouvred us to shore safely today without great difficulty. It must be said though, that the drivers are true masters of their trade. Nobody envies them for the constant cold in which they have to perform their task; yet they are always friendly and polite. 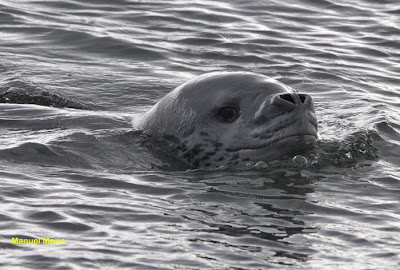 The first landing spot which the Expedition Leader chose for us today was Cuverville Island. It houses an enormous colony of gentoo penguins. We saw that a large proportion of the chicks have been born far too late in the season to have a chance of survival. This, we learnt, is partly due to global warming and the resulting greater quantities of snow which fall during the winters nowadays. Consequently the nesting sites for the penguins are snowfree too late in the season for the penguins to be able to complete their breeding cycle in time: a rather sad reminder of the careless use man makes of the whole planet. Apart from the penguins there was a lot of whale bone on shore which captivated our interest; and a fierce looking leopard seal was patrolling the shoreline. It kept sticking its head out of the water and sizing us up as if it wanted to decide who us might be the tastiest morsel for it. These seals are actually quite capable of making a human their victim so care had to be taken as we were leaving and boarding the boats.

After only a short break for lunch we reached a very different type of landing site in the afternoon. The Chilean research station of Gonzalez Videla is situated in a magnificent setting. The crew there kindly interrupted their daily routine to welcome us. How interesting to see the way scientists live and work in Antarctica! They also maintain a small museum with a souvenir shop and many of us jumped to the rare opportunity to get some gifts from Antarctica for our loved ones at home. The station is fully surrounded by a penguin colony and here we saw a very rare albino penguin. Our hosts assured us that the albinos are breeding as successfully as their pigmented kin. 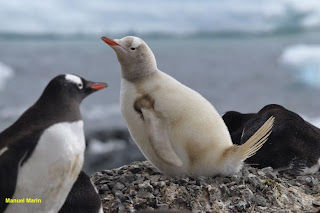 Again we know at the end of a day that we have been very lucky and are privileged to experience this pristine wilderness with Fram. Tonight the Expedition Team and the ship's officers are going to present a fashion show which will surely add to the memorable impressions of this voyage. 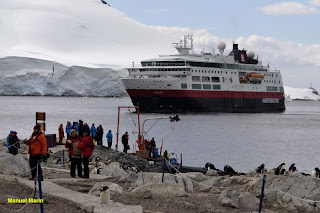