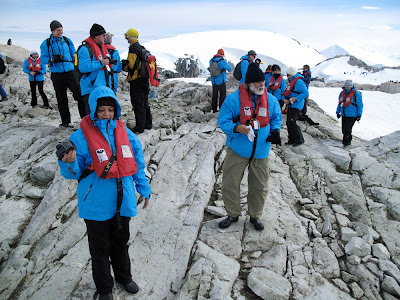 Phew! It has been a long day but a very fulfilling day.  We were up and out on deck before 7:00 as we were just entering the north end of the famous Lemaire Channel.  there were scattered high clouds with beautiful light beaming down the Channel.  Perfect for a thousand pictures.  In fact the Lemaire Channel at one time had the nick name of Kodak Crack.  But that was back in the days of film.  Remember film?
We arrived at Petermann Island at 08:30 and began our Polar Cirkle boat operations at 09:00.  The beautiful weather continued to hold.  You really needed to slather on the sunscreen today.

Our eagle-eyed ornithologist Manuel spotted a Chinstrap on the nest with a chick!  This may be the first recorded Chinstrap at this colony!  That made all three of the brush tail penguins nesting in a rather small area.  The Adelies have been declining on this island for the past  fifteen years or so and the Gentoos have augmented their numbers.  Now the arrival of the first nesting pair of chinstraps.  What does it mean?  Hard to say.    Climate change?  Changing food supply?  No one knows for sure but the it sure is interesting to observe.
We were able to get a nice long walk on Petermann.  The views to the south end of the island were really spectacular both at Iceberg Alley and beyond..
In the afternoon we stopped in at the Ukrainian base Vernadsky.  It was Christmas Eve in the Ukraine so everyone at the base was in very good spirits.  There has been a long standing tradition at the base which started when it was the British Base called Faraday.  Any woman that left her bra at the bar was entitled to a free drink of Vodka.  At least two bras were donated.  The tour of the base was terrific.  We learned that the hole in the ozone layer was first discovered here.  After several vodkas we loaded back into the polar Cirkle boats for a short cruise.  We encountered several Crabeater Seals and one Leopard Seal before returning to the ship. 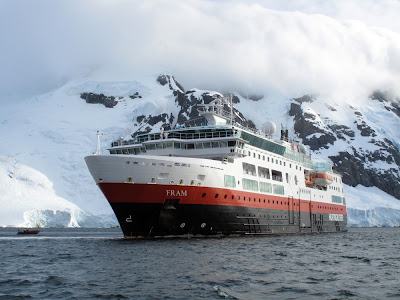 Forty lucky passengers went on a Polar Cirkle boat cruise in the Lemaire channel at 20:00.  We offered this special outing as an optional extra excursion.  But whether you enjoyed the Lemaire (this time north bound) from the ship or from a Polar Cirkle boat - it was a magical cruise and a beautiful evening.
By 22:00 we were all back on board Fram on and our way to our next destination:  Almirante Brown.