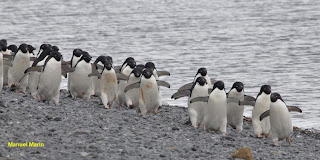 We must be among the luckiest people on Earth! Today was a truely amazing adventure filled with impressions you can hardly describe with words. We woke up this morning in good weather in the Antactic Sound which is usually full of icebergs. The scenery and the ice were simply stunning. As we approached the first landing site of the day - Brown Bluff - it quickly became clear that the ice conditions would allow us to land there, so we made our first landfall on the Antarctic Continent. And what a landing it was: The reddish brown volcanic cliffs were towing over a beach which was relatively easy to walk and we had an interesting and entertaining look into a colony of Adelie Penguins. These little fellows quickly conquered our hearts with their sometimes almost human behaviour. 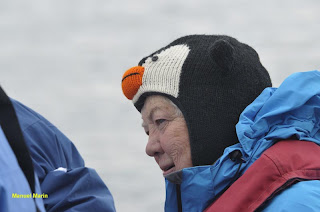 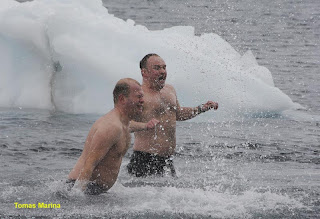 Everybody on board thought it could not get any better than this, but then as we continued on our voyage the sun came out and we saw seals and various kinds of whales among the icebergs. The light was beautiful as we cruised along. We were told about the hardships and miraculous salvation of a Swedish expedition which was marooned in this area more than 100 years ago. Just to think that we are following in their tracks today!

Slowly we arrived at Paulet Island for our afternoon landing, and all those who thought that we had already had our highlight of the day was proven wrong. This rarely visited island is home to a colony of penguins which is more than 300.000 birds strong. It is true, the smell of the colony is as strong as its population, but nobody minded really, because the experience of being in this place was aweinspiring and exhilarating at the same time. There were also nesting cormorants and we saw the remains of one of the huts which the unlucky Swedish explorers had built. It is a truely enchanted place. 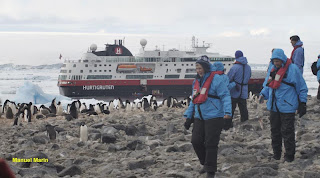 Surely, it cannot get any better than today, although who knows ... tomorrow we are going South into the Weddell Sea, where only very few vessels operate, and there may be many surprises for us in store.