Weather it's Dr. Jekyll or Mr.Hyde 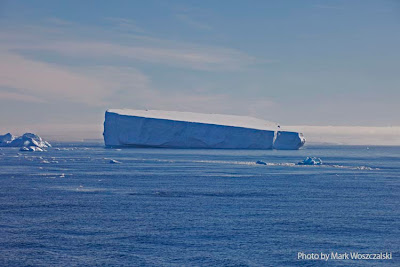 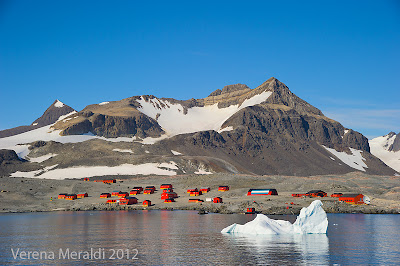 There is no place on earth more beautiful than Antarctica in the sunshine. At the close of yesterday evening the sky was also closing in. Clouds had continuously moved in to stuff all of the blue patches full of grey. We went to bed expecting morning weather of a similar ilk.

To our surprise we awoke to sunny blue skies and absolutely calm seas. Hardly a breath of wind disturbed the sea. Not what we were expecting but we will take it!

En route to our landing at the Argentine Base Esperanza we cruised by many giant tabular icebergs. We are now on the north east side of the Antarctic Peninsula in the Weddell Sea. These colossal islands of ice have broken free from ice shelves many miles to the south. They hitch a ride on north bound ocean currents and drift inexorably to where we saw them today. 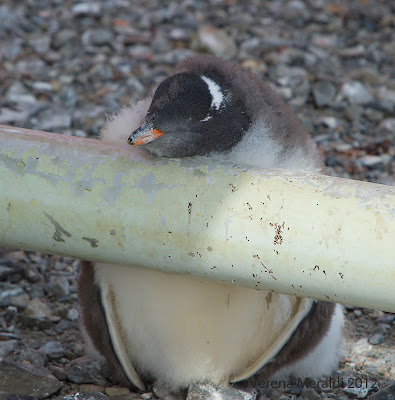 Shortly after 09:00 we began our landing operations. We could see all of the bright orange buildings of the base from the ship. Esperanza looked like a small town and that is probably the precise image Argentina had in mind when they first laid their sovereignty claims to Antarctica. In the seventies pregnant women were encouraged to come to Esperanza and in 1978 the first child was born here in Hope Bay further bolstering Argentina’s claims.

The tide was high when we arrived which permitted us to land at the quay. Several personnel of the base were there to greet us including the base commander. We were given a guided tour which included an historic stone hut from a Swedish South Polar Expedition in 1901-03. Three men had been stranded there for the winter with nothing to eat but seal meat, penguins and one bottle of Aquavit.

Inside the community centre we had the opportunity to buy souvenirs and mail post cards.

On return to the landing site we found that the tide had fallen buy a metre and a half. We could no longer use the dock and boarded the Polar Cirkle boats from the rocky shore beside the pier. 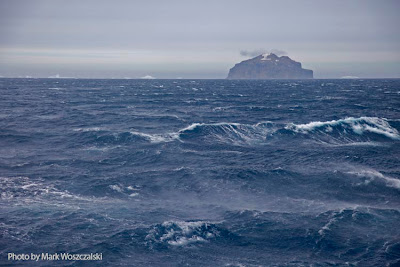 Our next landing was scheduled for Kinnes Cove at 14:30. It was only about 25 miles from Esperanza but in the short distance between the two landing sites the weather had done a Jekyll and Hyde. Sunny blue skies were now solidly overcast. Our mill pond sea was now laced with white caps. The gentle breezes of the morning were replaced with 35 knot winds. A landing at Kinnes Cove would be impossible.

We spent the next couple of hours investigating two other landing site alternatives in the vicinity but none offered shelter from the wind and the sea.

To make use of the unexpected sea time, lectures were soon arranged and the Framheim and Polhogda lecture halls were soon filled with people eager to learn more about the Geology and biology of Antarctica.

At about 17:30 we entered Fridjhof Sound where we encountered two Humpback Whales, two Minke Whales and several hundred Adelie penguins. Undoubtedly all of these animals were here to share one giant smorgasbord of sea food. We paused for awhile to enjoy the scenery of the sound and the many animals before proceeding out to the Weddell Sea.