What a beautiful day!

Our plans for the morning were different, but change is a part of Antarctic Expedition. We planed to sail through the 10 km long and narrow Lemaire Channel to reach the Ukrainian Research Station Vernadsky, located on the Argentine Islands. Well, that was the plan….. 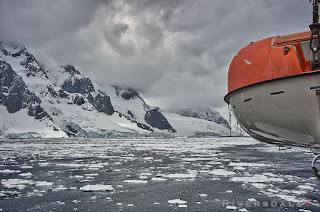 The Lemaire Channel welcomed us with a wind speed of 20 knots and light sleet. As we progressed, we were stopedp by heavy ice conditions. It was impossible to go further south, so instead of landing at Vernadsky, we put our PolarCirkle Boats in the water in the middle of the Channel. Incredible ice cruising was the result. We found a Leopard Seal, a Weddell Seal and a Crabeater Seal resting on separate the ice floes, surrounded by plenty of amazing sea and glacier ice. 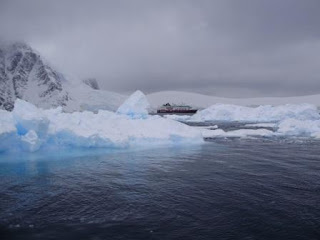 At the end of the operations the weather improved so much that we could see the top of double peaked Cape Renard, the Northern Guardian of the Lemaire Channel. 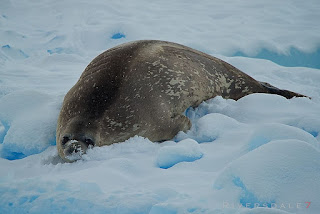 The afternoon saw us steaming between icebergs, as we made our way to the next destination - Paradise Harbour and Argentinean Station Almirante Brown. Paradise Harbour lived up to its name today. Sun shining and no wind at all, perfect conditions for landing. If we do not count the Gentoo Penguins nesting around the buildings, there are no personnel at the Base. Of course almost all of us had to climb the hill behind the Station. It is not too high a climb, but the recent falls of heavy snow hampered progress up the hill.

The view from the top was the best reward for the effort. The very clear air and beautifully shining Sun gave us an impression that all mountains around were within our touch. The way down the hill was much easier and way more fun. Sit on your backside and slide baby slide. After that we still had time to check on the small Gentoo rookery and were rewarded to find in some nests, little tiny chicks – some less than a day old – some where even fortunate to witness the hatching.