Exploring Hardangerfjord the Polarcirkles have been in use again. The weather was unkind for a large part of the day but there were at least some indoor options ashore.   At Ulvik, the landing is at Brakanes Hotel, with a welcoming lobby and large conservatory facing the fjord. There has been a hotel on this scenic spot for 153 years, the first building of 1860 had just four rooms. 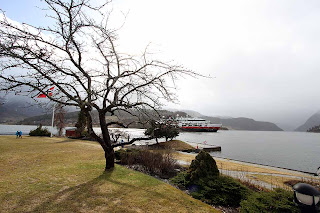 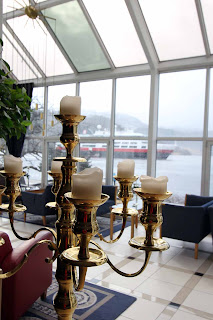 The thirteenth century stave church here was pulled down in 1710, and its replacement had the same fate in 1858. The third and present church of Ulvik was completed in 1859, the pretty painted decoration dating to 1923.  Surviving valuables from the medieval church are in museums, in replacement a copy of the alterfront of 1250 hangs on the wall. 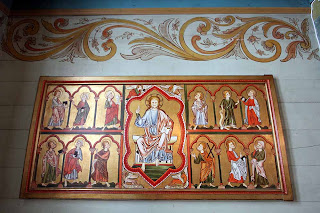 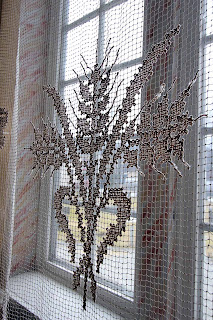 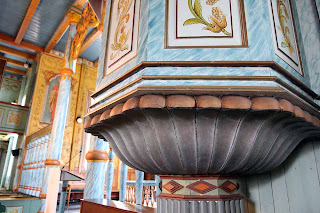 After lunch we landed at Agatunet on the western shores of Sørfjorden. This hamlet of 30 buildings dating from the Middle Ages to the present is one of the few remaining group farms in Norway. The buildings, local costume collection and fjord marine life all explained by local guides. 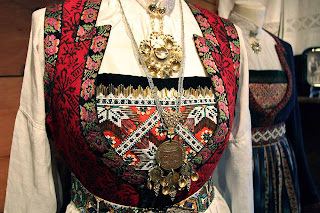 The Court of Appeals lodge built around 1250 is the oldest medieval building of its kind in Norway that is still standing on its original site.   Huge tree trunks make up the walls, and the later metalwork features on the door to the main room. 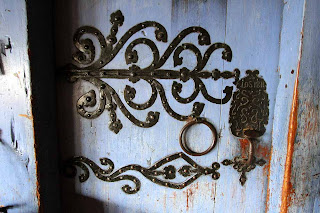 Email ThisBlogThis!Share to TwitterShare to FacebookShare to Pinterest
Photograph(s) by: Fiona Jobling
Newer Post Older Post Home
Welcome to MV FRAM's Expedition Blog!
MV FRAM is the most modern expedition cruise vessel belonging to the Hurtigruten fleet, roaming polar waters and taking people to remote places where only few go. In order to give you the chance to travel with us, even if only on your computer screen, we have created this blog. Here you can see what we have seen and read what we have done.
And, maybe you will be onboard with us one day!
All About MV FRAM - here
FOLLOW US ON FACEBOOK !