St. Magnus Cathedral dominates the skyline approaching the harbour. Kirkwall is the capital of the Orkney. This group of over 70 islands and skerries was first written of the Orkneyinga Saga of 1046. Less than one third are inhabited, but the population today is growing again, after a considerable decline leading up to the 1970’s. 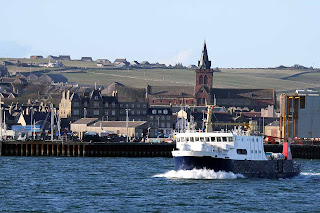 The Royal Society for the Protection of Birds is the largest landowner, a range of habitats exist are found within close proximity from cliffs to marshes, moors and maritime heath. A haven and breeding for many species. And for those migrating to and from the Arctic each year, the perfect spot for a break. 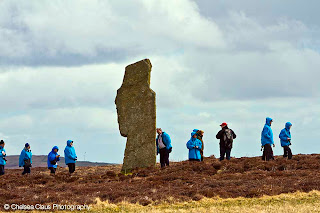 Visits included sights from a range of era in local history. The Heart of Neolithic Orkney including Skara Brae village and the Ring of Brodgar stone circle are included on the UNESCO World Heritage List. Skaill House, home to its Lairds for twelve generations and now open to see a family home of the 1950’s. Highland Park Distillery was combined with the 20th Century history of sheltered inlet Scapa Flow. The Italian Chapel was created by World War 2 prisoners of war sent to Orkney to build the Churchill Barriers. 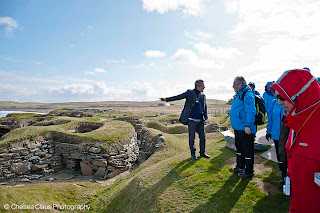 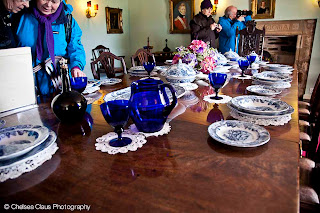 In town, built in French Renaissance style in 1600, the ruin of the Earl’s Palace stands next to the red limestone Cathedral, in which sits a memorial to John Rae. 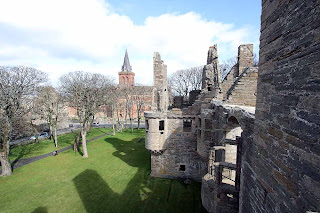 This year is the bi-cenntenial of the birth of this discoverer of the North West Passage. Recruited to the Hudson’s Bay Company, his time in Canada working closely with the Inuit resulting in his passion for Arctic exploration. Kirkwall’s pilot boat is named after him. The harbour pilot climbing down onto it after his work on the bridge was finished. 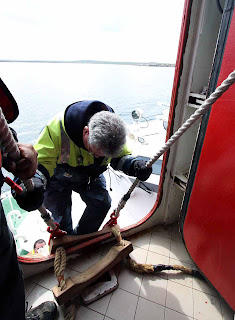 Pianist Ralf plays regularly in the Lounge, including today at Afternoon Waffles. But this evening he also took to the stage to sing works of German songwriter Udo Jurgens, as a prelude to the Fruit & Ice Carving. 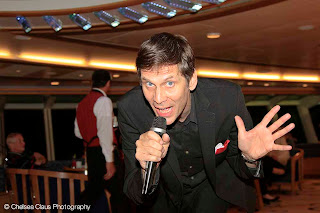 Email ThisBlogThis!Share to TwitterShare to FacebookShare to Pinterest
Photograph(s) by: Chelse Claus and Fiona Jobling
Newer Post Older Post Home
Welcome to MV FRAM's Expedition Blog!
MV FRAM is the most modern expedition cruise vessel belonging to the Hurtigruten fleet, roaming polar waters and taking people to remote places where only few go. In order to give you the chance to travel with us, even if only on your computer screen, we have created this blog. Here you can see what we have seen and read what we have done.
And, maybe you will be onboard with us one day!
All About MV FRAM - here
FOLLOW US ON FACEBOOK !