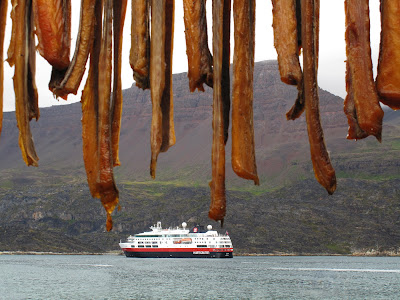 It seemed just about everyone on the ship joined in on our hike to the Valley Of The Winds this morning.  It was a brisk morning, overcast. Quite good for hiking actually.  We set off through town to the beach.  There were several large icebergs just off shore.  The near-black sand on the beach provided a nice contrast to the white ice strewn about the beach.  With a resounding crack one of the larger icebergs split into several smaller bergs.  Calving icebergs often inspire tsunamis. We scampered a little higher up the beach just in case.
Another hour of hiking brought us the waterfall at the head of the Valley.  It is really a picturesque place with high layered cliffs rising steeply on both sides of the valley. 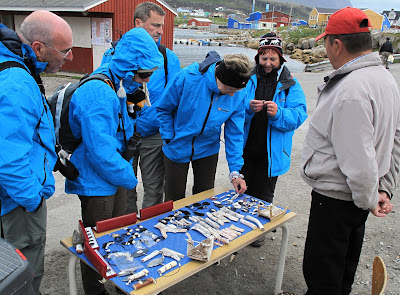 Back in Qeqertarsuq we had time to explore.  There are lots of opportunities to purchase crafts throughout our trip.  On the table in the photo you can see several items made from: reindeer antlers, muskox horn, bowhead whale baleen, seal claws, polar bear claws and dog skin.
Closer to the small pier where we were running our Polar Cirkle boat operations was a rack of drying fish.   Greenland Shark and Spotted Wolffish.  It is probable that the hanging fish will be fed to the dogs. However some species of dried fish are a delicacy for many Greenlanders. 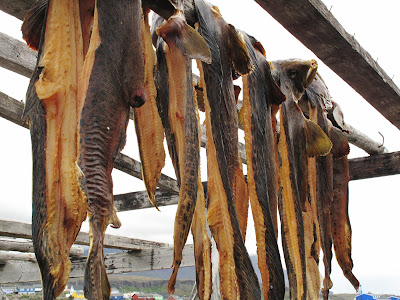