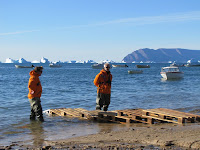 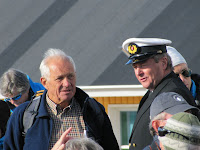 Twice a year a big ship arrives in Qaanaq, "Ultima Thule", the place to where people were evicted by the military in 1953. It is always a sensation, attracting everybody in the village. Today, there is something completely different going on, attracting many a tourist instead of the villagers: The unveiling of a memorial in honour of Eivind Astrup, one of many participants of Robert Peary's expedition of 1892, when the men crossed the Greenlandic icecap for the first time. A monumental walk, indeed, and today quite a few relatives of young Eivind Astrup are gathered in Qaanaq to witness the ceremony, along with FRAM's officers and all the "bluejackets" that take a shot of the inscription. 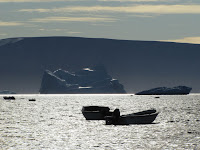 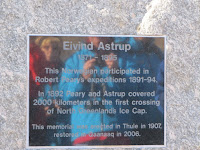 Even without this uniqe event, the landing would have been remarkably nice: A few bizarrely shaped clouds drift across the blue skies that frame the iceberg-loaden bay with the tricky tide that requires sophisticated pontoon building by the landing party. The museum shows many fantastic artefacts and features one of the last iron meteorites that had been widely harvested and brought to the US by the above mentioned Peary. Beautiful carvings are to be found in a small shop nearby, the hike to the icecap keeps a large number of mountaineers busy for hours. And then there is the great basketball game, FRAM's crew versus the villagers. And - believe it or not - victory was ours, 29:25 in the end! A very rare day indeed...