Hearts on a dump

Hello, everybody - we're back! Back from the great North which is also a blind spot for the satellite. So, take a bit of time and follow our last adventures that are posted here. Going back as far as Kraulshavn... 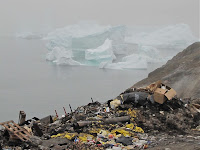 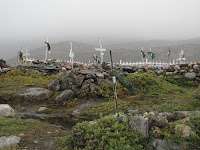 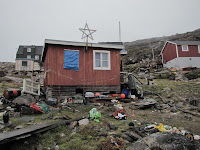 Everything in life we judge by looking at it only briefly deserves at least a second, closer look. The shiny new world has left us sometimes merciless towards the shadowy side of things.
Kraulshavn, our afternoons destination, is such a place that no catalogue would mention, no sales agent in the full possession of his wits would recommend.

Why on Earth do we go there? For the heaps of smouldering garbage that are piled on the beaches in front of the most beautiful icebergs? For the filthy dogs that lie in the littered mud outside their broken pens? For he constant putrid smell in the air? For the miserable houses, windows and roofs patched with plastic tarps? The answer is clear: Yes!
Because in this forlorn place that seems so far away from the world there are people living. Warm, welcoming, friendly, smiling people, who gather immediately around the landing site, of course kids up front. People who embrace this weird invasion by inviting us for coffee and cake, by proudly showing us how to hunt the narwhale from the kayak. The children exchange autographs with us, written in ballpen on our forearms, giggling and running around to display theirs. 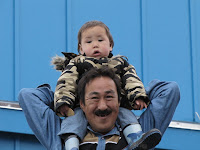 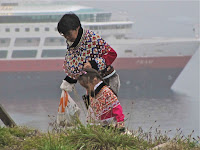 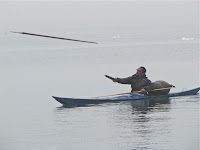 Young couples curiously approach us, shyly holding hands, some take pictures of us. And slowly it starts to dawn on the visitor that this is not misery we are witnessing but a bizarre way of the still existing traditional Greenland being confronted with the changes of the times. Only thirty years ago, as we learn, there was no material whatsoever that didn't decompose in a short time, so garbage was simply no issue. It is now, but changes manifest themselves slowly in this society that has survived for centuries by not changing. So no blame here at all. And the closer you look, the more often you find symptoms of this place being still way more traditional than the neat villages with their restored peat huts and museums; look at the graveyard, where under the christian crosses numerous piles of rock display the old way of burial on the ground. Walk with David, the hunter, who proudly shows you the 32 seals he has shot in only two days, see mother and daughter in their traditional garment coming back home. It's the people that define a place. Nothing else. 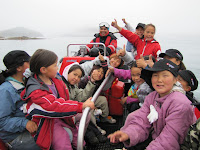 And so we all leave with undiluted sympathy for this place, still thinking of the laughing children on the rubble. This is more Greenland than many other places. In a good way.