Nothing But Blue Skies From Now On 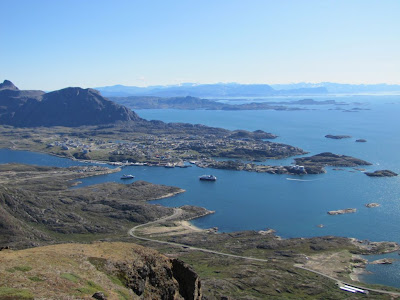 Blue skies smiling at me.  Nothing but blue skies do I see.  Or so sings Willy Nelson.  We can only hope for more blue skies like today.
This is the way to kick off a trip.  This morning, bright and early, we cruised through a rather thick sea fog.  Fog often collects when warm summer air meets cold ocean air on wind free days.  And just as often the fog is confined to the sea. That is exactly what happened today.  When we approached Sisimiut the fog parted in a rather dramatic fashion revealing the picturesque town.  It was almost as if we had planned it.
Shortly after 11:00 the 1st Polar Cirkle boats headed to the pier.  The 1st people off the ship today were those going on the long hike to the top of Palaasip Qaqqa mountain.  I climbed up Palaasip Qaqqa a couple of weeks ago and I can tell you that it's a fairly tough hike and I can also tell you the stupendous view from the top is worth the effort.  The 1st image shows the view of Sismiut (you can see the entire town) and the 2nd photo is of the hardy gang that made it to the top. 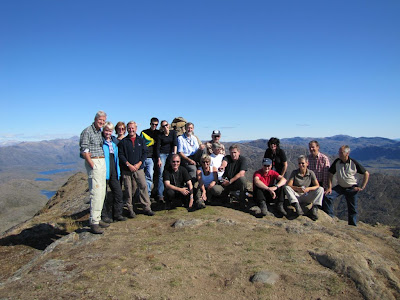 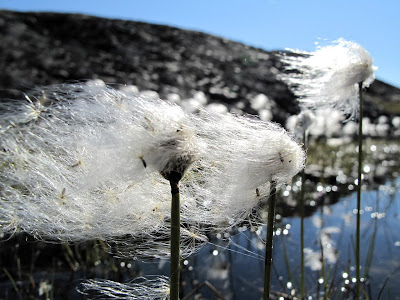 A lot of people also went on a guided hike to Tele Island where we saw the ruins from Thule people dating back to about 1650.  There are also a couple of Thule graves which look very much like stone cairns.  In one of the graves you can see the bones of the person that was buried there.  The graves are very typical of that time period.  They are built close to the ocean with a view of the sea.  People were not buried in a prone position but rather more in a foetal position. 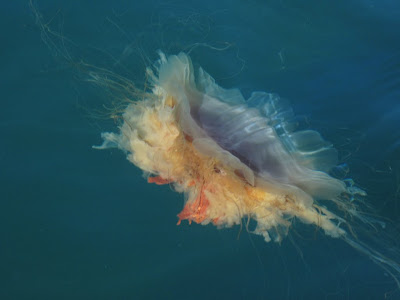 There were many jellyfish visible today.  Most of them were Lion's Mane jellyfish.  There was a Sherlock Holmes story entitled, The Adventure of the Lion's Mane  where a professor is killed by the sting of this jellyfish.  The sting can be painful but it is not enough to kill someone.  Lion's Manes are the largest species of jellyfish.  I photographed this one when I was standing on the dock.  It was just beneath the surface.
Well, just as Willie sings it, let's hope that there is "nothing but blue skies from now on".

Email ThisBlogThis!Share to TwitterShare to FacebookShare to Pinterest
Photograph(s) by: Andrew Wenzel, Steffen Biersack
Newer Post Older Post Home
Welcome to MV FRAM's Expedition Blog!
MV FRAM is the most modern expedition cruise vessel belonging to the Hurtigruten fleet, roaming polar waters and taking people to remote places where only few go. In order to give you the chance to travel with us, even if only on your computer screen, we have created this blog. Here you can see what we have seen and read what we have done.
And, maybe you will be onboard with us one day!
All About MV FRAM - here
FOLLOW US ON FACEBOOK !