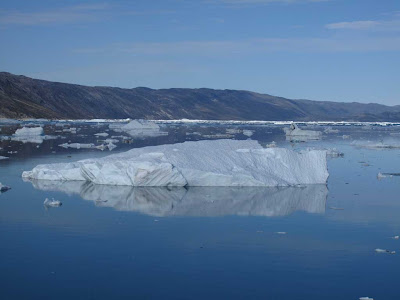 It was another beautiful morning as we cruised towards the glacier Eqip Sermia. En route we passed the old abandoned mining town of Qulissat.  We could see from the ship that the town looks as if everyone just left yesterday.
Our morning was filled with lectures in English, Danish and German.  We also attended briefings about our activities for tomorrow.
As we approached Eqip Sermia the channel became full of ice.  It was like a long conveyor belt of icebergs. The weather was terrific.  There were scattered clouds and lots of blue sky.
At 15:30 we were visited by King Neptune.  He was here to baptize all those who had crossed the Arctic Circle for the first time.  Lots of people lined up to have ice-cold water poured down their neck!
At 17:00 we dropped anchor at Eqip Sermia and began to whisk everyone to shore in the Polar Cirkle boats.  There was barely any wind and the sky was clearing up.  There were constant loud rumbles from the Glacier. 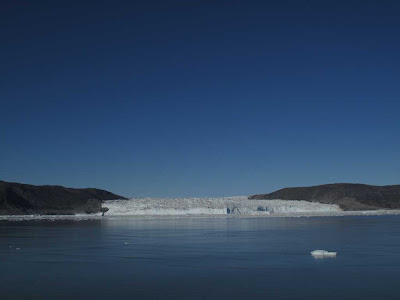 We were joined at Eqip Sermia by the ship the Bremen.  Soon we could hear there zodiacs running back and forth to the beach.  It was a very colourful mix of blue jackets from Fram and red jackets from the Bremen.
The last boat left shore at 20:45.
We all enjoyed a delcious barbeque back on the ship.
At 21:45 we were entertained in the observation lounge with a demonstration of fruit and ice carving.