If Life Is Moving Too Fast, Move North. 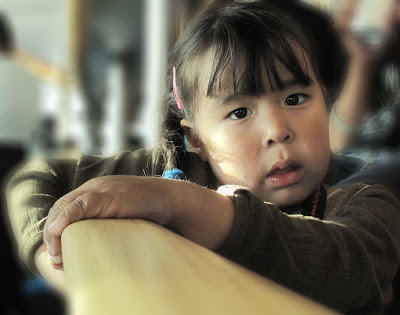 We visited Uummannaq this morning.  That's 590 kilometres north of the Arctic Circle and in the evening we went still further north to Ukkusisat.  That is very cool. 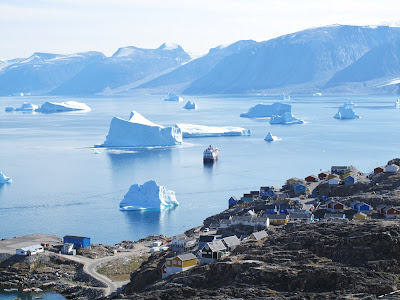 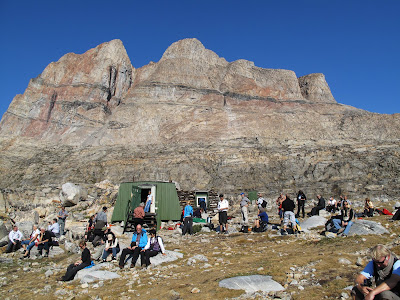 Uummannaq is home for about 1300 people.  That's a small town by most people's standards but it is a big town in Greenland.  The 11th largest in fact.  The hustle of the city is far away.  The speed of life is slower this far north.  Much slower.  Literally.  Did you know that the speed demons living at the equator are moving at 1,670 kph due to the rotational speed of the earth?  Uummannaq moves a lot slower.  The speed of life here is a mere 571 kph.  The slugs at the north pole are moving at 1 cm/24 hours.  So if you're prone to dizziness or just want to slow down, move to the north pole.  Of course we could add in the speed of the earth as it rotates around the sun (107,278.87 kph) but since that is constant everywhere on earth it doesn't figure into the equation here.
Look at the photo for today's visit to Uummannaq.  Could the weather be better?
No.  It couldn't.

Beautiful hardly describes the scenery.  It is something much more.  Stunning Greenland landscapes were our playground all day long.  Ha! Envious?  You have reason to be. The boat excursions to the Red Desert wove through hundreds of icebergs before arriving at a wondrous place that could best be described as a golden lunar landscape.  The hike to Santa's cabin had fantastic views of the ocean, multitudes of icebergs and multi-coloured cliffs.  The lunch at the Uummannaq hotel was a gourmet experience not to be forgotten.  All of that and more was our morning and early afternoon. And we still hadn't arrived in Ukkusisat where everything moves ever so slightly slower (further north you know). 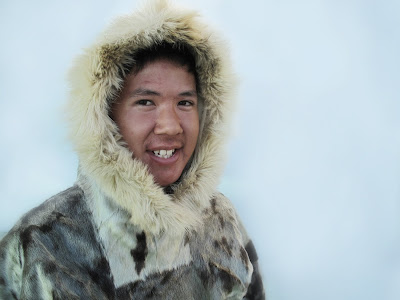 I have mentioned before that Ukusisat is my favourite stop in Greenland.  It is really a lot of fun having everyone from the village come on Fram.  The choir is great.  There were four generations in that choir.  Well, I'm not sure how much the baby was contributing.  You could tell the folk dancers were having fun by the smiles and laughter on the dance floor.   We even got to participate. I have two left feet. Definitely not a good dancer - but maybe that makes it even more fun. 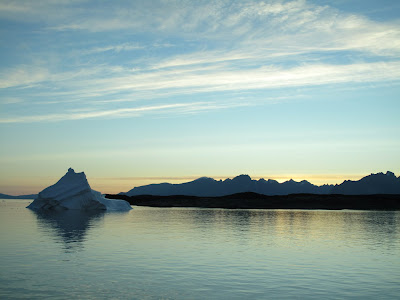 Now it's getting late.
23:25.
I just shot the last image for today's blog.  I know. It sucks to be us.
PS
Even though it is out of  chronological order, I had to put the little girl's picture first.