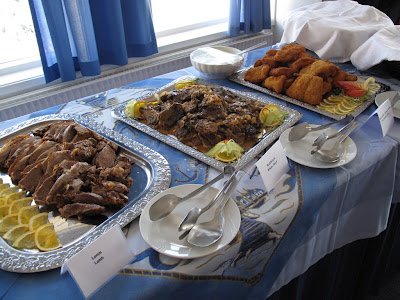 Sometimes there are hardships to endure during this voyage in Greenland.  Today I had to eat lunch at Hotel Uummannaq.  It is a magnificent buffet featuring local delicacies such are Muskox, Halibut, Reindeer, Seal, Whale and Shrimps.  We offer this lunch as an optional excursion and it is always very popular.  Today it was my turn to go.  Yippy!  I tried everything except for the whale meat.  I spent many years with a whale research group and then a couple of years at an aquarium.  I lecture very often on whales.  With that as my background no doubt you understand it when I say it would now be difficult for me to eat one.  However I did ask several people how they liked the Minke whale meat.  Invariably they said they were surprised.  They described it as being very good.  It was quite tender, mild flavoured and a little on the sweet side. 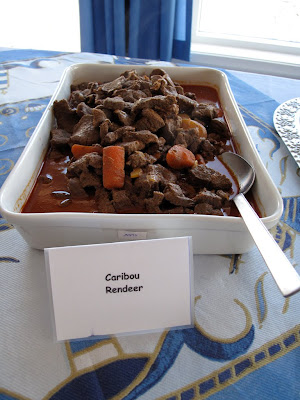 I helped my self to generous portions of Muskox, Reindeer (Caribou), halibut and shrimps.  Delicious.  The Reindeer (I tried not to think of Rudolph) was served as a spicy stew.  The Muskox was tender and a little bit sweet.  there wasn't any seal meat this time around but I have tasted it before.  I would describe it as being a little bit like liver.
The view from the patio is superb.  If you find yourself in this beautiful town, check out the buffet at Hotel Uummmannaq. M-m-m-mannaq! 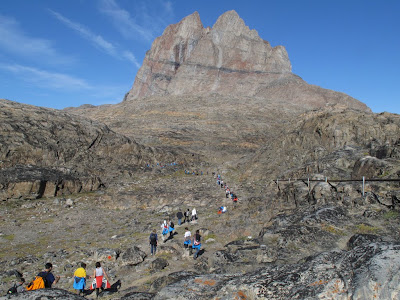 Shortly after lunch we started the hike to Santa's cabin.  We believe that we set a record for the number of participants on the hike.  Check out the long line of colourfully clad hikers! 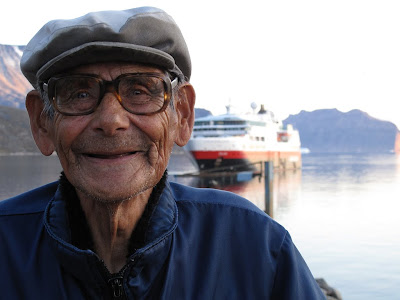 We arrived in Ukkusisat in the early evening.  The gentleman pictured to the right is Hans Petersen.  He is 82 years old and is the oldest person in the village. As per usual, we invited people from the settlement to visit us on the ship where they entertained us with singing and dancing.  They also modelled some of their native clothing.
Then, at approximately 21:00 we all jumped into the Polar Cirkle boats and visited the settlement. There are 150 people living in Ukkusisat so it doesn't take too long to wander about the village.  There was coffee and cakes served in the town hall.
At 22:30 the last Polar Cirkle boats headed back to the ship.  There were lots of hugs and goodbyes.  These people are our friends.  It was our last trip to Ukkusisat for this season. It will be a year before we see them next.

Oh. You were wondering about the hardships I had to endure today.  I was so stuffed from the buffet that I could hardly drag my butt over the rocks on the  hike to Santa's cabin.  Ugh!