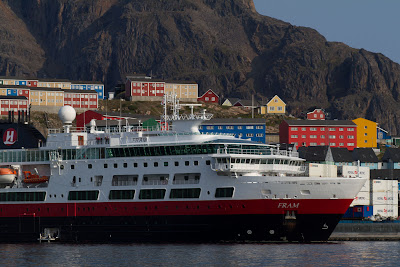 Early this morning the water was like glass. The wind was light and variable as we approached Sisimiut.  It looked like it was going to be a great day.  By 11:00 we were alongside the dock.  Sisimiut has a lot to offer.  It is the second largest city in Greenland with a population of approximately 5350 people.  It is important historically, economically and culturally. 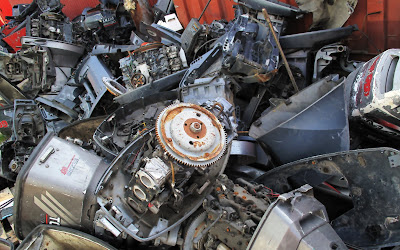 To get to town one has to walk through the small but very beautiful harbour.  It is just loaded with colourful fishing boats both large and small.  You walk by crab traps and even what appears to be a grave yard for old outboard motors! 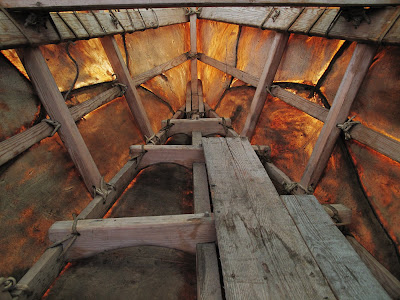 There is a fine museum that has lots of artifacts from local digs.  People settled this region in waves and the museum has examples from the Saqaq Dorset and Thule cultures.  The third photograph is of the inside of an Umiaq, a boat made from seal skin that only women used.  This is a rather large Umiaq that several people would paddle together.
There were several options for excursions.  some people chose to go a rather challenging 6 hour hike to the top of Palaasip Qaqqa mountain.  They had a perfect day for it.  You can see all of Sisimiut from that lofty peak.  Others chose to go to the ghost town of Assaqutaq.  All afternoon blue jacketed people could be spotted on walking tours through town or out to Tele Island.
There was plenty of time to go on an optional excursion or two and still have time to explore the town on your own. 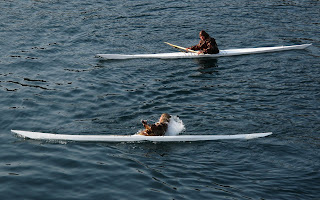 Just before our departure we were treated to a really great demonstration from expert kayakers.  There are 36 ways to roll your kayak and I think we saw most of them.
As we head for Qeqertarsuaq we have calm seas and a lovely warm sunset.

Email ThisBlogThis!Share to TwitterShare to FacebookShare to Pinterest
Photograph(s) by: Andrew Wenzel, Joe Decker
Newer Post Older Post Home
Welcome to MV FRAM's Expedition Blog!
MV FRAM is the most modern expedition cruise vessel belonging to the Hurtigruten fleet, roaming polar waters and taking people to remote places where only few go. In order to give you the chance to travel with us, even if only on your computer screen, we have created this blog. Here you can see what we have seen and read what we have done.
And, maybe you will be onboard with us one day!
All About MV FRAM - here
FOLLOW US ON FACEBOOK !