Antarctica in the sun

During the night we were heading southward to our next destination, Neko Harbor, in Andvord Bay, the southern end of the wonderful and very impressive Errera Channel. This should be our continental landing during our trip and we all were looking forward to it. During the night our lovely Lady MV FRAM had to struggle with a lot of ice and strong winds so that we reached Neko Harbor with a delay of two hours. But the morning started than directly with a beautiful sunrise and just before we reached Neko Harbor we could watch many Mink and Humpback whales. So there was no reason to be unlucky about the delay. 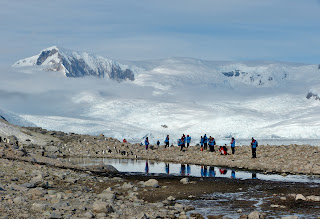 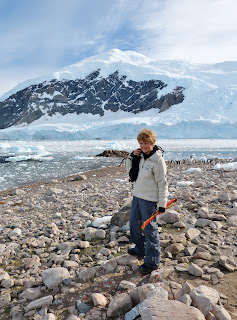 The morning in Neko harbor was brilliant. The sun was shining so strong that even 8 passengers went for swimming before they went back on board. A Weddell sea that was lying directly next to the landing site has been the first photo object. 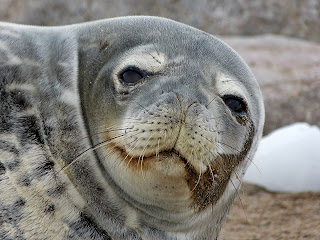 She was very lazy and stayed on the beach until the last passenger had taken his picture.  Neko harbor is famous for its Gentoo penguin colony and we had the Gentoos all over the place. It is the end of the season and so the chicks are running around in the colony, hoping to find the parents to get more food. Plenty adults started already their own malting, feathers were flying all over the place. 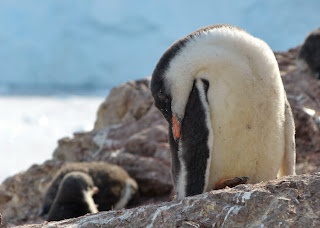 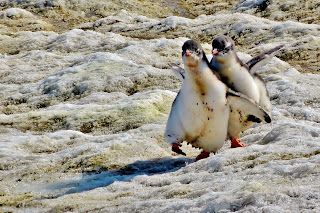 Most passengers climbed up a little ridge behind the penguin colony. The spectacular view we got from the hill over Andvord Bay will be unforgettable.

Back on board we sailed through the Neumayer Channel to our next destination – Port Lockroy, a former British Station. Today it is a museum and souvenir shop run by the British Antarctic Heritage Trust. As the museum is a post office also we used the possibility to send postcards to our friends and family at home. 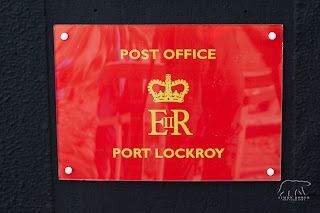 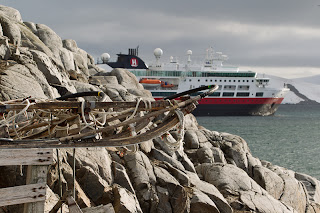 In the later afternoon the sun said good bye to us. The wind was picking up a bit and after the landing all passengers have been happy to be back onboard to enjoy the evening in the panorama lounge with a nice drink and an interesting talk with new friends.


But we had 14 guests that had other plans for the evening and even the night. 14 campers left the ship after dinner to arrange their camping side in Damoy Point, just next to Port Lockroy. They built up their tents with the help of the expedition team and then they could feel free, perhaps a bit like the really great explorers. This special night, we named it “Amundsen Night”, will be an experience nobody will forget, that´s for sure 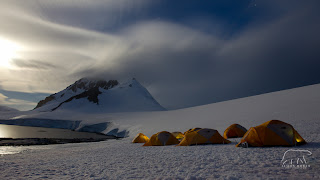 Email ThisBlogThis!Share to TwitterShare to FacebookShare to Pinterest
Photograph(s) by: FriedaPhoto, Simon Bober
Newer Post Older Post Home
Welcome to MV FRAM's Expedition Blog!
MV FRAM is the most modern expedition cruise vessel belonging to the Hurtigruten fleet, roaming polar waters and taking people to remote places where only few go. In order to give you the chance to travel with us, even if only on your computer screen, we have created this blog. Here you can see what we have seen and read what we have done.
And, maybe you will be onboard with us one day!
All About MV FRAM - here
FOLLOW US ON FACEBOOK !