Our landing started at Danco Island a trifle earlier this morning at 08:00.  It was warm at 2˚C and we were once again treated with a near windless day.  The skies were overcast but with warm temps and flat calm seas it felt like a summer day.  Uh, well, actually it is the middle of summer.  No wonder it feels like summer.
Danco is a lovely small island situated right smack in the middle of the picturesque Errera Channel and is the home of approximately 2000 pairs of Gentoo Penguins.
One of the great things about Danco is that there is a nice hike up a long slope which terminates on a flat, broad snow and icefield.  It seemed like just everyone made the arduous trek up to the plateau like summit.  From the top of Danco one gets a marvellous 360˚ view.
Everyone got a full hour and a half on shore which gave them plenty of time to visit the colony and to trek to the top.


In the afternoon at 15:00 we landed Neko Harbour.  The grey skies had begun to break up and rays of sun shine poked through here and there.  Everyone was excited to get in shore because Neko is a continent landing.  It was our first opportunity to set foot on the  continent of Antarctica!  Yahoo!! 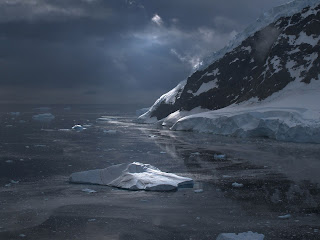 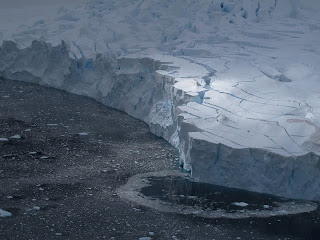 We landed on a nice sandy beach where dozens of Gentoo Penguins were preening and just generally hanging about.    It was about a 3 or 4 minute walk from the landing site to the main colony.  And then up hill again!  This time the Expedition Team lead us on a long trek up to another snow-covered icefield only this one had two small crevasses.  One 20cm crevasse paralleled the path for a few metres and then about 30 metres up the hill, the path traversed another crevasse of about the same size.
In any case, neither of these small cracks posed a problem as the Expedition Team posted staff members at strategic spots and placed plenty of flags to indicate the exact position of the crevasses.
The view from the top was magnificent!  On our right side and behind us were spectacular glaciers and mountain peaks and to the front and left were great views of  Neko Harbour clear across the glaciers on the other side.  There were great booming and thundering sounds coming from the glaciers on a regular basis.  A few of us were lucky to seem the glacier calving as well as a couple of small avalanches. 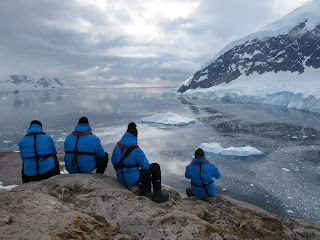 Towards the end of the landing two Weddell Seals hauled out close to the landing site.  In fact one of the seals settled down a scant 20 metres away and was totally unconcerned with the Polar Cirkel boats zipping in and out of the bay. 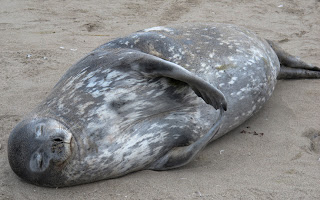 By 19:00 the last boat left the shore.  Everyone had enjoyed a full three hours on shore today and everyone returned to the ship with a smile on their face.
Now it is 21:00 and we are heading further south.  The wind has picked up remarkably.  From a day when the wind barely nudged past 5 knots to a full 25 to 30 knots.
Ah well.  The forecast for tomorrow looks good.  But as always in Antarctica, believe it when you see it!