I’m Canadian and as everyone knows, Canada is a land of four seasons.  In Canada it’s easy to tell the spring from the summer, the summer from the fall, the fall from the winter. However Antarctica seems more like a land of two seasons. Summer or winter. For the past three weeks you can see and feel the change of the season. Summer is over and old man winter is knockin’ at the door.

We are experiencing at least 8 hours of darkness every day now. It’s colder. You can feel the tenacious grip of winter in the air.  A day of warm sunshine is now a welcome respite from the more constant days of damp grey. Everywhere you look you see the foreshadowing of winter. For the most part, the chicks of all the sea birds in Antarctica have lost their down and are now fully feathered. The chicks from Gulls, Terns and Skuas are either flying or about to take their first flights. The Antarctic Shags are the same except their young are also taking their first plunges in the ocean. The Adelie penguins have already returned to the sea and the Chinstrap and Gentoos are soon to follow.

In Canada we see a change from summer to fall in the autumn leaves. On the Antarctic Peninsula the autumn colour might be represented by the pink and green snow algae. Certainly at the end of February the algae is at it’s greatest extent showing up in places like Peterman Island in big swaths of bright pink and green on top of the snow.


We landed on Petermann at about 09:30. The Expedition Team took a pool as to how many Adelies would be left on the island.  By the end of the landing we had counted seven. Drat! I was off by three. Still, there were lots of Gentoos roaming around. The Gentoo chicks at this stage are loads of fun to watch often approaching to within a metre or less. It is my guess that it is hunger driving their curiosity. 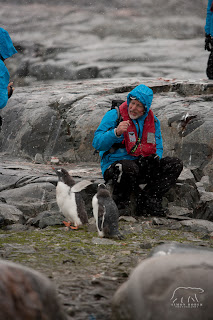 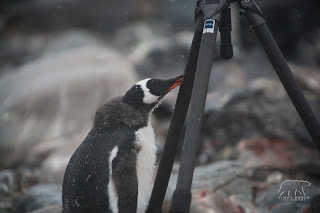 By 10:00 snow was falling steadily and the wind began to pick up.  At times there was a mixture of snowflakes and ice pellets but after a while large heavy flakes floated down. Soon the bright areas of pink and green snow algae were covered by a light blanket of snow. And just like that, Old Man Winter splashed a bucket of white over the bright colours of autumn. Everyone got a full hour on shore which was enough time to see the Blue-eyed Shags on the south end of the island and to wander over for a look at Iceberg Alley towards the north end.

By 13:00 we wrapped up the landing and headed into the Lemaire Channel, quite probably the most famous Channel in all of Antarctica. We couldn’t see the tops of the mountains with the low cloud cover, but it was still really great to cruise through the scenic channel.

Around 17:00 we encountered several groups of Humpback whales in the Gerlache Strait. We had time on our schedule to stop to do a little whale watching, and what incredible whale watching it was! We had feeding Humpbacks quite close to the ship yet once again!  We focused o na small group of three whales. It was our guess that it was a female with a large calf and an escort.  Time after time the whales lunged to the surface with their mouths agape. At times we could look down their throats!  We could see their plates of balleen and their ventral pouches fully expanded. The whales were feeding on krill which was evidenced by a large red cloud left behind when one of the Humpbacks defecated!! We stayed and watched the whales for about thirty minutes but then it was time for us to move on.

Tomorrow would be our last landing in Antarctica and then it will be time for us to begin our northward migration to South Georgia, the Falklands and Buenos Aires.

Email ThisBlogThis!Share to TwitterShare to FacebookShare to Pinterest
Photograph(s) by: Simon Bober
Newer Post Older Post Home
Welcome to MV FRAM's Expedition Blog!
MV FRAM is the most modern expedition cruise vessel belonging to the Hurtigruten fleet, roaming polar waters and taking people to remote places where only few go. In order to give you the chance to travel with us, even if only on your computer screen, we have created this blog. Here you can see what we have seen and read what we have done.
And, maybe you will be onboard with us one day!
All About MV FRAM - here
FOLLOW US ON FACEBOOK !